Following up on my previous post with the best Narrow Angle Camera image of the asteroid Steins from ESA's Rosetta spacecraft, I have reprocessed the images taken by the Wide Angle Camera around closest approach.  While the apparent image size in the frames at closest approach isn't much bigger, the phase angle is higher, meaning that there are more shadows.   Higher contrast features are easier to positively identify even when they only take up a few pixels, since they are less likely to get lost in instrument noise.  What made this image harder to produce (despite only being able to decently align four frames) is that there is a serious change in viewing angle from image to image.  The images used are W20080905T183758428ID20F17, W20080905T183802520ID20F17, W20080905T183804306ID20F14 (used as a base to align the other frames), and W20080905T183805803ID20F15.   I am much more pleased with the result than the image in the previous post.   It seems to be reasonably sharp given the dataset available and large enough to be viewed comfortably.

The second version has been filtered to enhance the visibility of faint details. 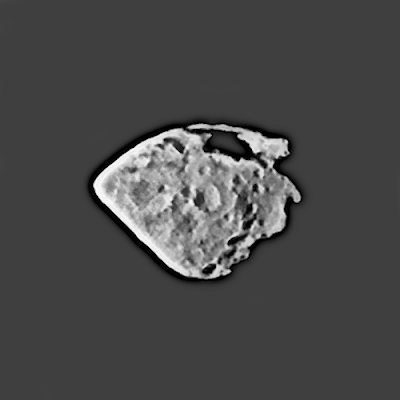 As Rosetta approached the asteroid Steins in 2008, its Narrow Angle Camera (NAC) went into safe mode, costing it the highest resolution pictures.  As a result, the best images, taken near closest approach, were from the lower resolution Wide Angle Camera (WAC).  This image was produced from the last raw images taken before the NAC stopped taking pictures.  While not quite as good as the later WAC images, it shows Steins from a significantly different angle.  At some point, I plan to work with some of the best WAC frames.  However, since they were taken much closer to Steins, spacecraft motion has much more effect from frame to frame, meaning that stacking them will be much more difficult. 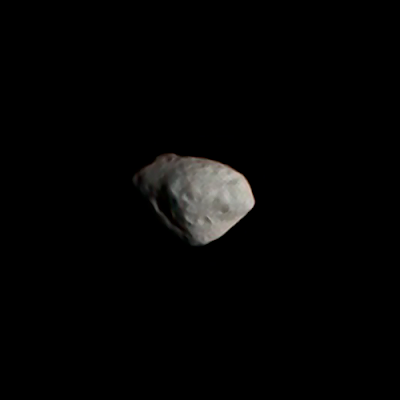