DS-1 missed its original launch window. Because of this, Its Mars flyby was canceled, and it had to find a new asteroid.  The asteroid, 9969 Braille, was only 2 km in length at its longest, much smaller than the original target.  Still, the mission was sufficient to test the technologies DS-1 carried.

During the cruise phase, DS-1 made observations of Jupiter and its moons.

More importantly, it observed Mars.  Although it was distant and the imagery wasn't that good, the infrared spectr

At last, on July 29, 1998, DS-1 flew by the Asteroid 9969 Braille.  Unfortunately, it went in to safe mode just before the encounter, leaving it without needed navigation imagery.  That , coupled with Braille being much fainter than expected, caused the imaging sequence to miss the asteroid (it didn't entirely miss, but the automated features mistakenly edited out the wrong parts of the few images that contained the asteroid).  Most of the images were taken using a sensor known as the "Active Pixel Sensor" (APS) in order to test the technology and beause of the limited amount of memory.

The infrared spectrometer caught the asteroid, showing it to be a fragment of Vesta.  Two sets of two images were obtained during the outbound phase of the encounter, showing the asteroid to be an elogated rubble pile.  The first pair, taken with the CCD, is the best. 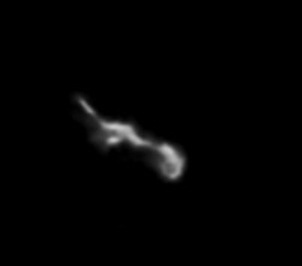 The second, taken via the APS, shows a somewhat different angle.  It is shown here with the CCD image for comparison. 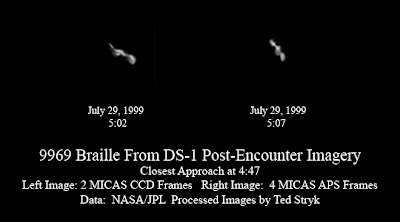