The Journey of DS-1 Part I: Background

In the mid-1990s, NASA was basking in the heyday of "Faster, Cheaper, Better."  This philosophy, while it had been promoted earlier, really took hold after the loss of Mars Observer in 1993.  The idea was that instead of only launching a few large, expensive missions designed to conduct a cornucopia of investigations, NASA would launch a plethora, of small, inexpensive spacecraft designed to accomplish a few narrowly defined exploration goals.  The success of Lunar Prospector, Mars Pathfinder, Mars Global Surveyor, and the Near Earth Asteroid Rendezvous (usually just referred to as "NEAR") missions buoyed those who believed that this approach, along with an occasional "flagship" mission, such as the Cassini/Huygens mission to the Saturnian system, allowed a robust program of planetary exploration on a relatively low budget.  Looking back, there is some truth to this - NASA had a tendency of focusing only on "Blockbuster" missions and ignoring smaller, cheaper opportunities.  Still, the giddy administrators of the day greatly underestimated the cost of operating a successful mission, often blindsiding those who actually worked on the missions.

The chickens came home to roost in 1998-1999.  NASA launched three planetary missions within a short period.  One, Stardust, succeeded in returning samples from a comet and is now headed for a rendezvous with Comet Tempel-1.  The other two, the Mars Polar Lander and the Mars Climate Orbiter, failed for embarrassing reasons that were the direct result of insufficient testing and operating budgets. 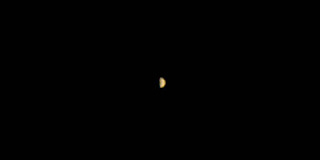 This is a slightly enhanced version of the

Also aboard the Mars 1998 lander were two hard-landing penatrators, which were primarily there as part of the Deep Space 2 (DS-2) mission, part of NASA's New Millenium program.  They vanished without a trace.

The New Millennium Program was designed to test new technology for planetary and earth orbiting missions.  The idea was straightforward.  No mission planners want to risk their mission to try out unproven technology.  Still, new technology often requires tests that simply cannot be done on the ground.  The New Millennium were designed to test these technologies using cheap, dedicated missions that were not bound by science goals (all science was considered a "bonus") and thus could validate technologies to be used on scientific missions.  DS-2 was designed to test hard-landing technology, and, as a "bonus," was to look for subsurface ice on Mars.  It's total failure to return any information, engineering or otherwise, coupled with problems that plagued the earth orbiting side of the program, lead to the scaling back of the program to simply testing technologies in earth orbit and not using its meager resources to send spacecraft into deep space.  The program was canceled in the 2009 budget.

Before the 1998 Mars failures signaled a rethinking of the approach to planetary missions, an ambitious test mission left the ground.  It was the New Millenium Program's  Deep Space-1 (DS-1), designed to test solar electric propulsion, a miniature imager/spectrometer, and a small solar wind instrument.  It was also designed to test automated navigation software.  This mission made a productive (though problem plagued) journey through the inner solar system, sending back "bonus science" along the way.  In my next two posts, I will chronicle this journey.