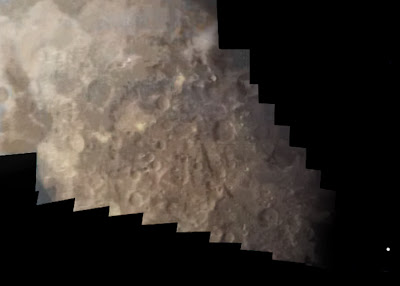 Hiten was launched by Japan on January 24, 1990.  The spacecraft, intended as a technology demonstration mission, entered a circumlunar orbit and released a small orbiter,  Hagoromo, into lunar orbit (Hagoromo was also a technology demonstration mission).  The transmiter on Hagoromo failed rendering it scientifically useless, but the orbit insertion burn was verified optically.  The only scientific instrument on Hiten was the Munich Dust Counter (MDC).  The MDC provided data on the dust environment between the earth and the moon until April 10, 1993 when Hiten was intentionally crashed into the lunar surface between the craters Stevenius and Furnerius.
Hiten carried an optical navigation camera called the Optical Navigation System (ONS).  The ONS consisted of a  384 by 490 pixel array.  Since Hiten was spin stablized, the ONS shifted the charge from pixel to pixel to compensate for smear.  The images were converted into a 4-bit digital signal that was relayed to earth.  The resolution of the camera was about one arc minute.
Due to the limits of its spin compensation, small chip size, and 4-bit imagery, the images the ONS obtained were useful only for navigation.  However, the ONS was used during the final plunge to the lunar surface, making for a Ranger-esque kamikaze sequence, although the quality is much poorer.   The white dot marks the impact point.  The view has been colorized.  Below is an animation of the made from the sequence.

Very cool blog. Enjoyed reading it. Not exactly sure what everything means but it is informative.

Thanks! I really do need to spend more time writing and clarifying my posts.

"The ONS consisted of a 384 by 490 pixel array. Since Hiten was spin stablized, the ONS shifted the charge from pixel to pixel to compensate for smear."

where is the camera positioned on this cillinder sat.

And what would be the rotation/sec it would have to compensate.

To get an idea behind the challenge of getting a picture.