After the Braille flyby, the DS-1 primary mission was finished.  It was to go on to encounter Comet Wilson-Harrington, a nearly inactive comet, and then Comet Borrelly, a more active comet.  However, what seemed like disaster struck when the star tracker failed, leaving DS-1 unable to navigate.  Amazingly, the flight team managed to program the spacecraft to use the MICAS camera, despite its narrow field of view, to be the navigation camera for the spacecraft.  By the time this was accomplished, it was too late to reach Wilson-Harrington, but DS-1 could still make it to Borrelly.  However, given that the spacecraft would not have a star tracker during the flyby since MICAS was being used to image the comet, there were fears that the imaging portion of the flyby would fail.

Amazingly, in September of 2001, as DS-1 approached Comet Borrelly, it successfully acquired the comet.  I have marked the comet with an arrow.  Everything else in the frame is due to a horrendous light leak.  Keep in mind that the approach was made at a very moderate phase angle, so the stray light problems are not due to being pointed near the sun.  The approach to Braille was looking very close to the sun, making the stray light problem much worse, and Braille was a much fainter target - no wonder DS-1 had problems aiming at it! 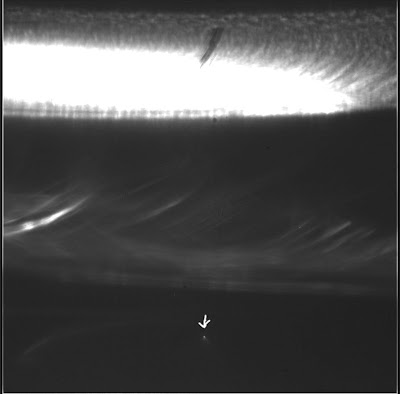 On September 22, 2001, while it's parent country was reeling from the September 11th attacks, DS-1 made its close approach to Comet Borrelly.  This image is a long exposure to show features in Borrelly's coma. The next view is a closer view, showing features on the nucleus. 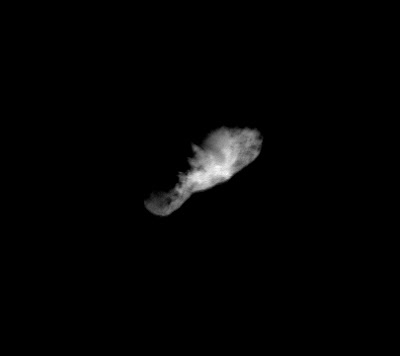 The final view is a the best view of Borrelly.  It shows numerous topographic features as well as faintly visible jests coming out of the nucleus.  The image quality is far better than was expected for DS-1, and this image was by far the highest resolution view of a comet obtained to date (~45 meters/pixel in its original form - it has since been surpassed).  DS-1's solar wind monitor also studied the comet. 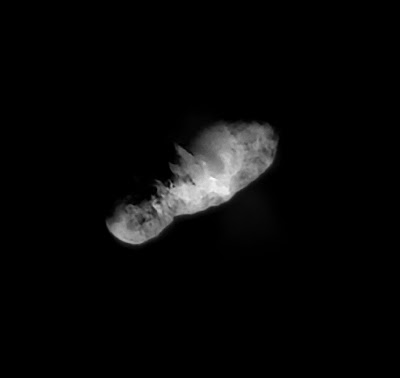 There was talk about sending the probe on a six month "hyperextended" mission to an asteroid, but with the spacecraft being nearly out of fuel, this idea was rejected.   Two months later, contact was lost, indicating that it had indeed run out of fuel, meaning that this extension would not have been possible.
Despite not being classified a science mission, DS-1 filled that role successfully, studing Braille, an asteroid which it confirmed to be related to Vesta, taking important spectra of Mars, and giving mankind what is still one of its best looks at a comet.  Although it had many difficulties, the DS-1 was truly the little spacecraft that could!

Note that, as I said in parentheses, it has since been surpassed - the only other closeup comet images at the time were from the Halley flotilla. You are indeed correct that those later missions obtained images with much higher resolution.