This image of frost on Mars has become iconic.  Unfortunately, it is tiny, because it was obtained using Viking's low resolution mode and there was no high resolution image taken along with it.  Using a different high resolution image and simply using the color as an overlay would not work, because the frost would be absent or the patterns wouldn't match.  Other image sets of the frost exist, but they have more serious problems with over/under exposure due to the high contrast of the scene and the limitations of the Viking imaging system. Therefore, I used super-resolution processing, a technique pioneered by Tim Parker of JPL, in order to get the best resolution I could out of the existing dataset.  The result is quite pleasing. 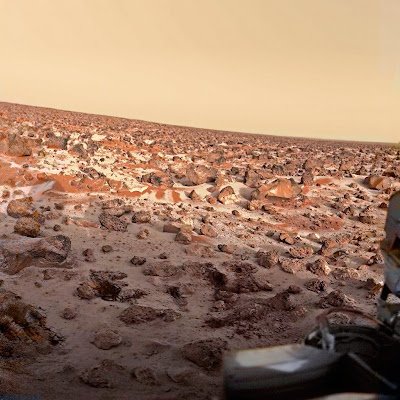 Fantastic! By far the best version of this Ive seen, and since Phoenix expired before there was substantial frost/snow on the ground, it might be the only image like this for quite some time :(