Cassini is now routinely sending back images of Saturnian satellites in with the rings, as well as passing in front of the planet. The Voyagers only got one good set of such images, a set by Voyager 1 of Dione. Unfortunately, the only filters used were orange, blue, violet, and ultraviolet. Without a green image, a red Saturn always ended up being in the background, along with a bluish Dione, as seen in the planetary photojournal. 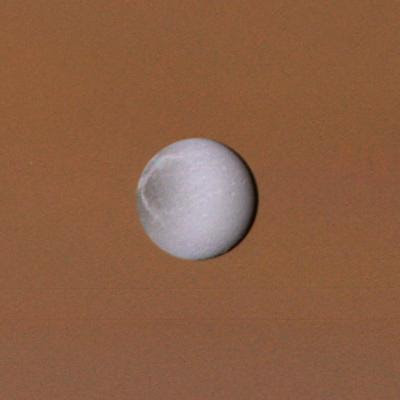 The view below was constructed with O-V color with 25% import on the O-V synthetic green image from the blue data. It was overlayed on top of an O-G-V-UV super-resolution black and white image. Although Cassini has taken better pictures of Dione, this stands as a pretty picture of an icy world hanging over its parent.