The Land Between Triton's Frozen Lakes

One of the biggest discoveries of the last decade has been the discovery of unfrozen lakes on Saturn's moon Titan.  This was the last good chance we had at finding standing liquid and non-transient streams and rivers on the surface of any extraterrestrial world in in our solar system, Io's lakes of magma nonwithstanding.  Such things had clearly existed in the past, but were either dried up or frozen over.  Back in 1989, there were hopes that we would find lakes of liquid nitrogen on on Neptune's moon Triton.   And indeed, it had produced such lakes, but they have since frozen over.   Fortunately, a pair of these lakes were in the area that received the best coverage from Voyager.   This included a narrow "bridge" that separated the pair, which was included in four of the highest resolution images of Triton obtained. This allowed me to stack them to reduce noise and improve clarity (although not all of them include the whole area covered here).  I wasn't able to get (or expecting to get) a great improvement over my previous processing efforts or those of others, but there is a moderate gain in clarity.  To be honest, I took this on for an April Fools prank, but I couldn't decide on how to approach that on time.   Still, since I went to the trouble of doing the processing work, I figured I'd share the result. It is shown at ~375 m/pixel. 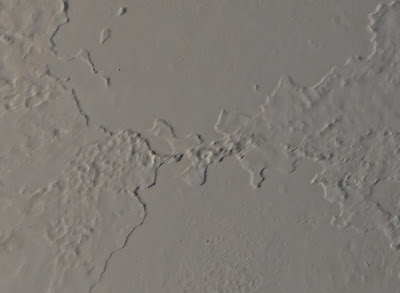