Umbriel, a moon of Uranus, is about 1200 km across, is less reflective than the planet's other moons, except for mysterious bright features seen on the rim of what appears to be a crater and the central peak of another.   It was imaged by Voyager 2 in January of 1986, at 10 km per pixel in the two images snapped at closest approach.  Unfortunately, one was underexposed and slightly smeared, and the other was properly exposed but very smeared.  My processing of the images a few years ago, which can be seen here, was focused around desmearing and bring out detail.  This is all well and good, but the artifacts from such processing made it, well, ugly.  While there are other views that include more images and were less smeared/underexposed, they were much more distant, making them frustratingly small.   I decided to start from scratch, reprocessing the two highest resolution frames, combining them at 125% of their original size, and create a color overlay from more distant images.  Having refined some of the techniques I used in 2009 and trying to avoid overextending the processing, I have created a version that is much more beautiful and perhaps gives us an idea what Umbriel really looks like.  Since it will be at least another decade, and probably much more, before we see Umbriel close up again, it is unlikely to give up its secrets any time soon. 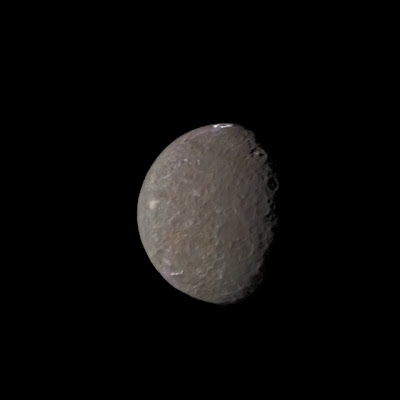 In honor of the 400th anniversary of the discovery of the Galilean moons of Jupiter (from largest to smallest - Ganymede, Callisto, Io, Europa), here they are to scale from NASA's Galileo spacecraft (with the exception of a tiny bit of Voyager-derived gap-fill for Callisto). 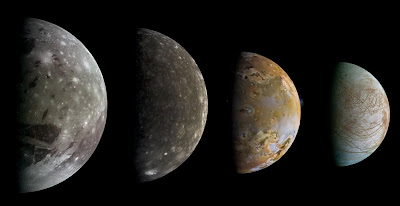