On it's way to Pluto, the New Horizons spacecraft made a distant flyby of Jupiter in 2007.  It didn't get close enough to match Voyager and Galileo views of the Jovian moons.  It took a lot of images of Io to monitor its volcanoes, but it took very few images of the other moons, since there was little its monochrome high resolution images could do in terms of science from that distance that wasn't done by previous missions or from Earth.  Still, the few images taken of the three icy Galilean moons are worth taking a look at, given that they show somewhat different angles/regions than most good Voyager and Galileo images.   Perhaps the best is this exquisite little image of Ganymede, taken on February 27, 2007.   Ganymede's large size and contrasty surface somewhat make up for the 3.5 million miles between it and the spacecraft.  The color information is taken from Galileo data. 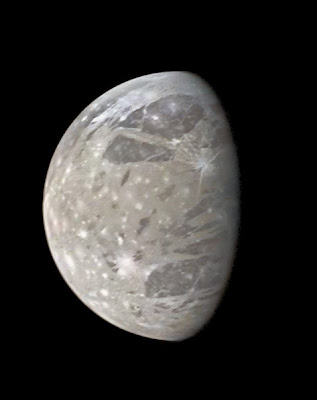