Spirit, the first of the two Mars Exploration Rovers (MERs) to land on Mars, was officially declared dead this week.  It had been silent for about a year, but there were hopes that improving seasonal conditions might lead to its reawakening.  Sadly, that did not happen.  As a small tribute, here is a small panorama, taken in early 2004, looking at Grissom Hill.   Spirit traveled in the opposite direction, so it got its best views early on.  In order to combine images taken from slightly different positions, I had to cut out the foreground, as it would not match up.   Until we meet again!

Additionally, here is a reworked version of Spirit's view of its own heat shield from the 82nd sol (Martian day) of the mission). 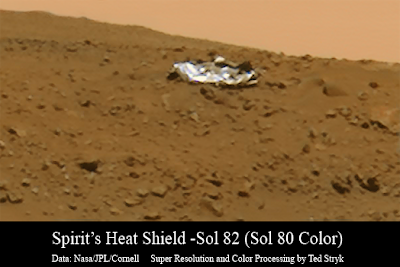 Until we meet again, Spirit!