Some projects don't work out...

When I do work with limited and/or poor quality datasets, the failure rate is high.   Such was a recent attempt to make a perspective view from images of the surface of Venus taken in 1975 by Venera-9, the first spacecraft to take pictures from another planet.   Below is my enhanced version of the panorama it took.

Given that the spacecraft was only expected to last around an hour on the surface and its  slow transmission rate (by modern earthly standards), the view was only 128 pixels high and about 512 pixels wide.  In order to sample both the horizon and nearby areas with good enough resolution to distinguish what was being seen, the camera scanned a 180 degree panorama that started out looking at the horizon, dipped down in the center to the foot of the lander, and then went back up to the horizon on the other side.   My goal, following work that Don Mitchell has done with the much better datasets from Veneras 13 and 14, was to make a picture that would show Venera 9's surroundings from a more normal perspective.  I had reprojected the corner images before, as seen below. 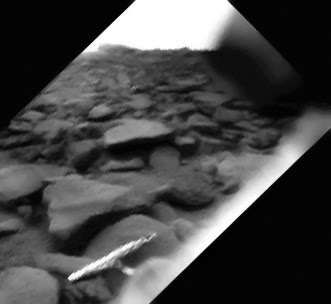 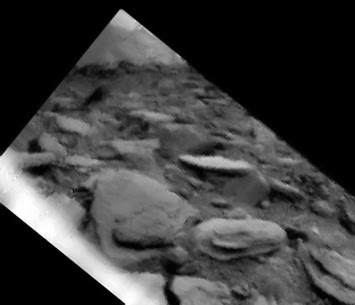 These views, while from a somewhat more human perspective, are still awkward to look at.  My goal was to sample features at different distances in order to create something resembling an ordinary photograph.  The problem was that unlike Veneras 13 and 14, which took similar scans on both sides of the lander, Venera 9 only took one, and at significantly lower resolution.  In fact, the compilation is so obvious that some blurring was necessary to disguise the fact that the scan lines and pixels were going in different directions in different places.   Also, while I intended the image to be 480x640 pixels, the largest presentation it could sustain and still look half way presentable was 275x360.  Still, at about 99,000 pixels, it is still oversampled (the original data comes to about 65,500 pixels).  In other words, the best that could be managed was an image slightly less than 0.1 megapixels.   It also took some inventiveness.  One side of the panorama shows a ridge in the distance,  the other side does not.  The transition had to be guessed at.  Also, filtering was done to reduce the effects of differing illumination angles, improving the believability factor but at the expense of yet more resolution.
This is the finished product.  It turns out that there was not enough data in the Venera-9 set to make this work. 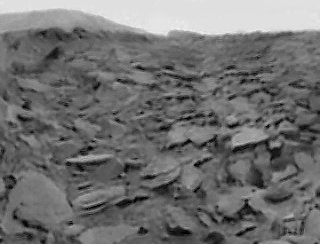 Finally, for fun I made a colorized version based on the Venera 13 and 14 color images. 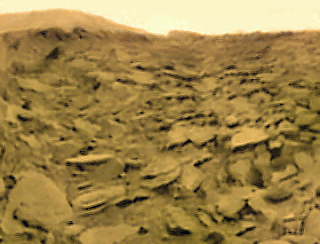 A close shot from Pioneer 10

This rarely seen image, badly damaged by the effects of radiation on Pioneer 10's imager, is from dataset A4.  It was taken 726,000 km from Jupiter.  A hint of the red spot can be seen on the terminator.   This image is still a work in progress. 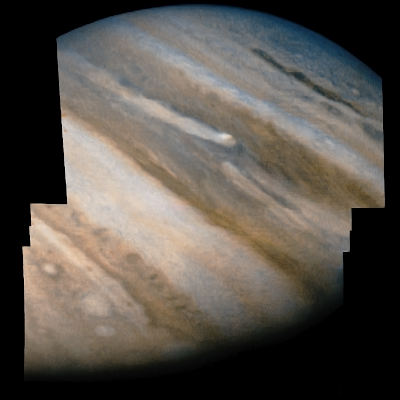 Here is an alternate processing with some cosmetic improvements and scaled closer to the original pixel size. 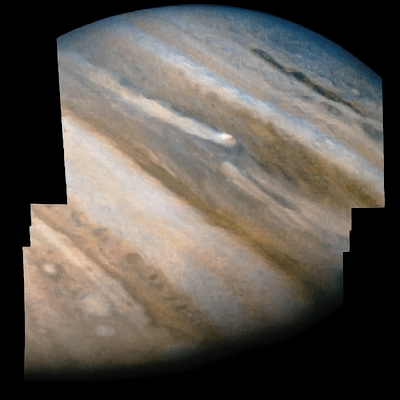 This exquisite image of Jupiter is from Pioneer 11, the last (and the closest - 760,000 km) image to show the planet's full disk before closest approach. The image, C5 in the pioneer catalog, is a combination of a red and a blue light scan with a synthesized green.  Images like this present a processing dilemma.   Pioneer got an unusually good view during approach of the south polar region during approach and an even better view of the north polar region as it left.  In my attempts to process these images, there appears to be a blue glow around the polar regions, perhaps due to a haze.  However, since I am working from scans and not digital data and the scanned prints are of varying quality (the yellowing of the individual sheets of paper was surprisingly inconsistent) and this is near the limit of what can be discerned.  Thus, figuring out if it is real is difficult.  The limitations of the medium, plus the 6-bit nature of Pioneer images, makes interpreting faint features very difficult. 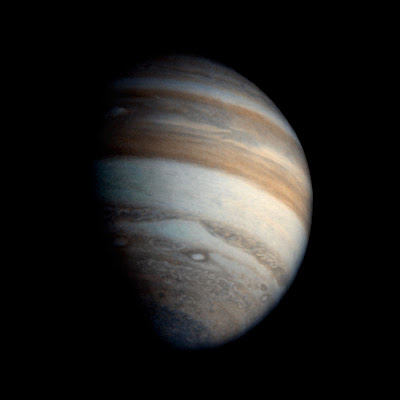 While this dataset is very limited, it provides some of the best views we have of Jupiter's poles, so I intend to do more work with it in the near future.

While I'm at it, here is image C25, taken from 2.3 million kilometers.   It shows a higher phase angle than can be seen from earth.  It does not one of the polar region images, but it is a pretty picture nonetheless. 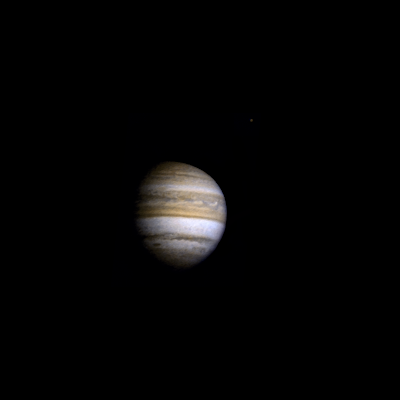