Mariner 7 far encounter imagery and the horrors of analog data...

As Mariners 6 and 7 approached Mars in 1969, they took a series of approach images for the purpose of creating a global map of the planet beyond the limited coverage they could obtain during the fleeting moments of the flyby.  During near encounter, limited portions of the digital data were returned, as well as analog data for the entire image.  The analog data was sent in its original form and also after being filtered to bring out fine details.  This allowed more images to be taken than could have been taken in an entirely digital format because, strange as it sounds today, there wasn't a tape recorder available that could hold more than three or four 7-bit digital images of about half a megapixel.  It did, unfortunately, also lead to serious degradation of the images.

For most of the far encounter (save a short bit at the end, which was all digital but with so much of the image missing as to render the frames extremely hard to use), the images were only sent in an unfiltered analogue format.  Thus, while similar in pixel size to many images taken by Hubble and by other approaching spacecraft, the images tend to be indistinct.   Worse, the crispness is very inconsistent.   Features of equal contrast within darker colored areas of mars are less distinct than in bright areas, and features near the terminator are less distinct than those in more brightly lit part of the disk.  Higher contrast features are sharper than lower contrast features.  Thus, while one can get a better result than this version from JPL's website (probably an original press-release image), it is next to impossible to get it to look like a modern image. 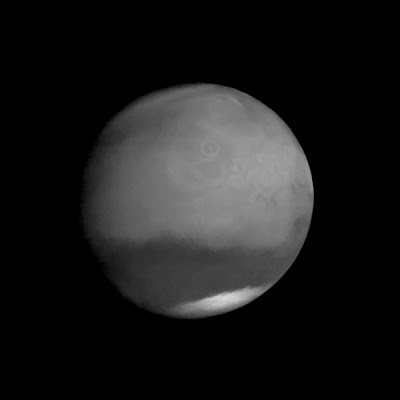 In previous work with this set, I have focused on the digital color images (I need to rework this - I was focused on reconstructing the missing parts of the image and didn't make any attempt to do even relative calibration of the color) and on doing a cleanup of all the images from the approach.  Thomas Romer assembled my cleaned up images in to some neat movies that look like Nickelodeon movies from over a century ago (there is also some quality loss due to the use of the gif format) - you can view Mariner 6 and Mariner 7 by following the links.   I have made several attempts to make improvements on the images, but unlike my work with the near encounter images, I have had trouble developing techniques that meshed with the spongy oddities of the far-encounter analog-only images.   This version, done in 2007, was one of my most successful attempts, but it still looks off.
Recently, after the images from ESA's Rosetta spacecraft's flyby of Mars in 2007 were released, I felt the need to take another crack at this dataset.  I also attempted to extrapolate from the color data Mariner 6 and 7 obtained for some areas of the planet to colorize the images.  I first worked on the famous image of Phobos (the dark blip near the top of the image) passing over Mars .   The result, while good considering the quality of the data, highlights a serious problem - high contrast features stand out - note how sharp Phobos itself is - while low contrast feature are lost, with the problem being inconsistent throughout the image.   There were also problems with the color overlay. 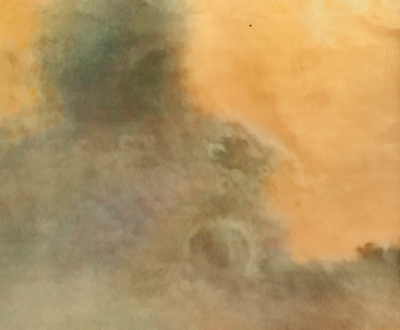 In the final image, which in my view is the most aesthetically pleasing image to date, I stacked the images over various Mariner 7 images (from F76-F82).   Since there is significant rotation, the overlapping portions of the frame had to be reprojected to match.  Portions of images with near the limb or terminator were discarded except for portions of F78-F81, as foreshortening and differences in illumination would have been too damaging.  Color was reconstructed as faithfully as possible based on color images of similar regions (dark, light, polar, clouds, etc).   The result, while relatively good, still shows the limits of  the dataset, as some portions of the image are clearly sharper than others.  I may in time do a few more of these (they won't be as good, as this face was seen at the highest resolution by Mariner-7, and the image quality is somewhat better than Mariner 6). 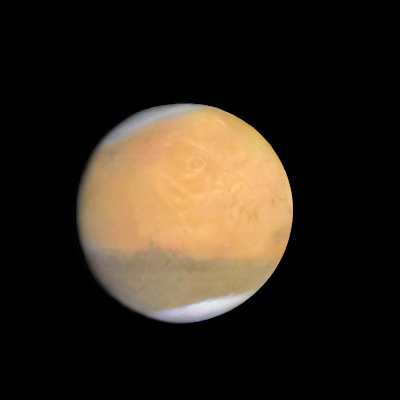