So it has been several years since I abandoned this blog. Today is a major day in the history of space exploration, the twentieth anniversary of the Voyager Neptune flyby. While the planet itself was fascination, perhaps the most fascinating part of the flyby was Voyager's visit to Neptune's largest moon, Triton. It was an exhilarating feeling seeing the Neptunian system come to life, a feeling that will perhaps be replicated when New Horizons completes the initial reconnaissance of the solar system at Pluto (regardless of what you think of Pluto's status, when we set out to explore the solar system it was considered a planet, so to claim that our initial reconnaissance is complete because of its demotion feels hollow). I will post some views of Triton today, and will be posting more material today and in the coming days. 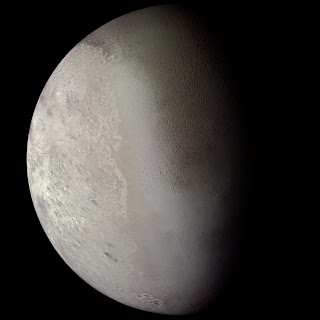 Nice pics man.. I have to thank Emily for directing me here.. Loving it.. Keep up the good work...